VR Games VS Games with VR

Everything that we’re used to calling VR games is usually associated with such acclaimed hits as Pavlov, Beat Saber, or Superhot VR. But what about supporting updated VR games like Tekken 7, Super Smash Bros, Ultimate, or Fallout 4? Can they be considered full-fledged VR games, or do they still belong to a different category? What are VR games differences? The developers of Melior Games know the answer.

This genre specifically defines the small number of games where you cannot do without a VR headset connected to the console. By the way, the price of a good VR headset is about $1000. This is the relatively inexpensive Oculus Rift and the Valve Index VR Kit, which most gaming enthusiasts cannot afford.

We believe that Beat Saber is as close as possible to the design and management criteria of VR games. The headset controllers act like lightsabers, the player perfectly takes a fighting stance, changes the angle to avoid the attacks of a virtual opponent.

Verdict: Beat Saber is an example of thoughtful design and all aspects of VR control.

Pavlov is a game that will make the hearts of gamers beat faster. The VR headset provides virtual fighters with complete freedom and control over the environment and team actions. An experienced gamer can pass an ammo magazine to his/her comrade, hit the enemy with accurate fire from around the corner, or even disarm opponents by removing a magazine with cartridges from an automatic rifle. 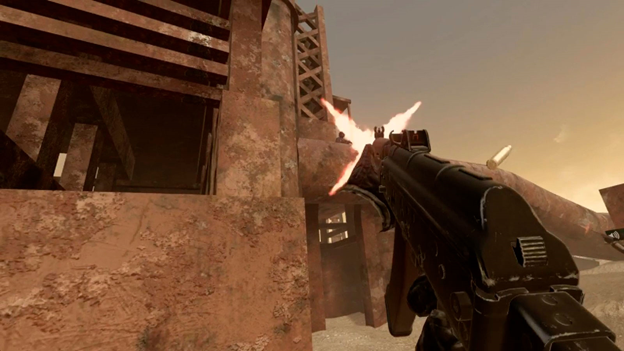 Job Simulator is a VR game with the same freedom of movement as in Pavlov. The player can work in the office, or just stay idle, or violate another boring day at the office with crazy stuff that comes to mind. For example, toss a ream of paper or even a printer to a neighbor or even a boss through a partition.

Verdict: Job Simulator is a great VR headset game for fun, “bloody” office battles to take some stress off.

Superhot VR. Here, the gamer fights enemies with all available means. The trick is that the game time moves along with your actions.

Verdict: a very realistic work for VR controllers, which respond perfectly to the slightest movements of the player.

The peculiarity of such VR games is that virtual reality is added after the release of the original version. Hence the result – gamers accept far not all games with VR. More often, such innovations, even if they attract attention, are very soon forgotten.

Fallout 4 VR is a typical example of failed VR support for a popular game. Gamers should pay $60, that is, to overpay twice for the lack of graphical settings, performance problems, lack of mod support, and frequent crashes! Agree that a 360 camera is not worth that much money.

Tekken 7 was a huge hit among gamers between 2015 and 2017, and preparations for a new fourth season are now underway. But the community took the VR version more than coldly and there are reasons for this.

The matter is that the player is offered the role of an outside observer, a minimum of options in a limited space. The battle with a passive dummy, the lack of rounds, and even an elementary timer are all good reasons that a cool 3D fighting game failed in the games with VR format.

The Smash Ultimate with VR has the chance to appeal to gamers, perhaps with an affordable $50 for a set of glasses for Nintendo Labo. As for the functionality, it is limited by the ability to passively observe processor battles. You can only play actively in single games, but without using stick controllers. This mode can hardly be called attractive, and therefore many gamers don’t even remember about it.

There are not many interesting VR video games yet. However, games originally developed for VR should not even be compared to games that received VR support after launch. The loss of quality is obvious if the developers have not taken care of the design and functionality that would meet the new format.

The Melior Games team has enough experience to develop both VR games and games with VR. For all organizational, technical, and financial issues of the development of gaming applications, contact us online, or request a call back on the website.

Do you want to improve your self-confidence, commitment, creativity, and out-of-box thinking? No, it’s not about…

Due to the COVID-19 pandemic, people are preferring to stay at home and avoid social gatherings….

Up until very recently, Virtual Reality was in the stage that computers were at several decades…